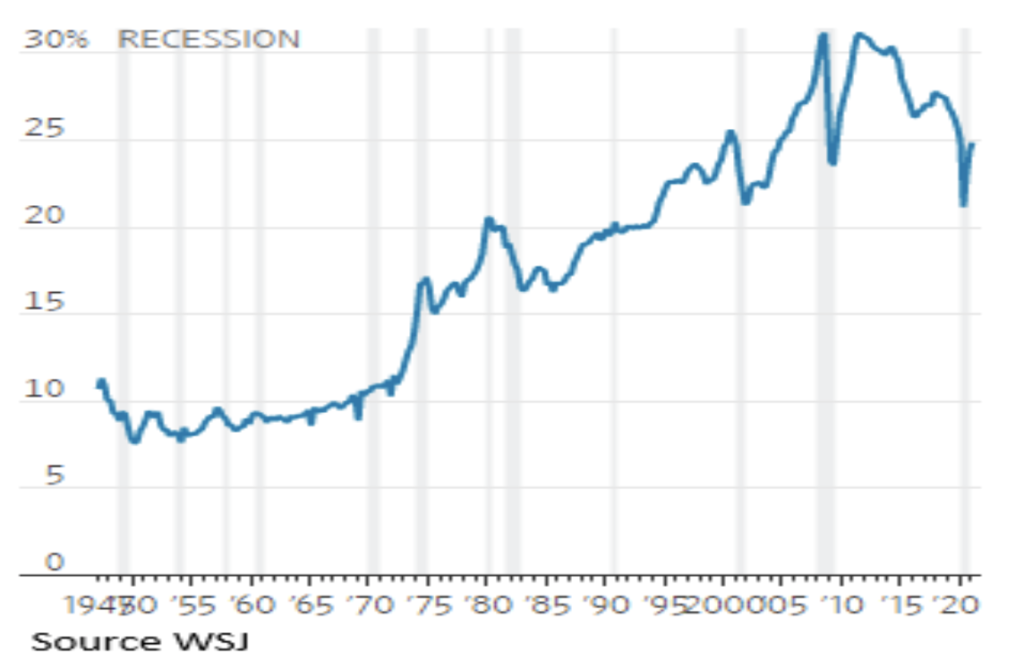 We already evoked it. After 40 years of decline in inflation & interest rates, with a pendulum/balance between capital and labour continually tipping towards the former, the possibility of a secular change/turnround cannot be ruled out.

Global trade increased from 25% of world GDP in 1970 to 60% in 2008 whereas, as shown on the chart above, it soared in the US from 11% in 1970 to 31% in 2011. While global competition allowed developed countries to import disinflation/deflation from their trade partners, such secular forces have begun to reverse (especially with Trump’s tariffs, etc). Above all, the pandemic is laying the ground for further changes, witness again the speech of Macron yesterday who no longer wants to depend on foreign suppliers in key fields such as medical products, etc. However, onshoring will come at the cost of lower competition & higher input prices.

World population: % above 65 and below 5 years old 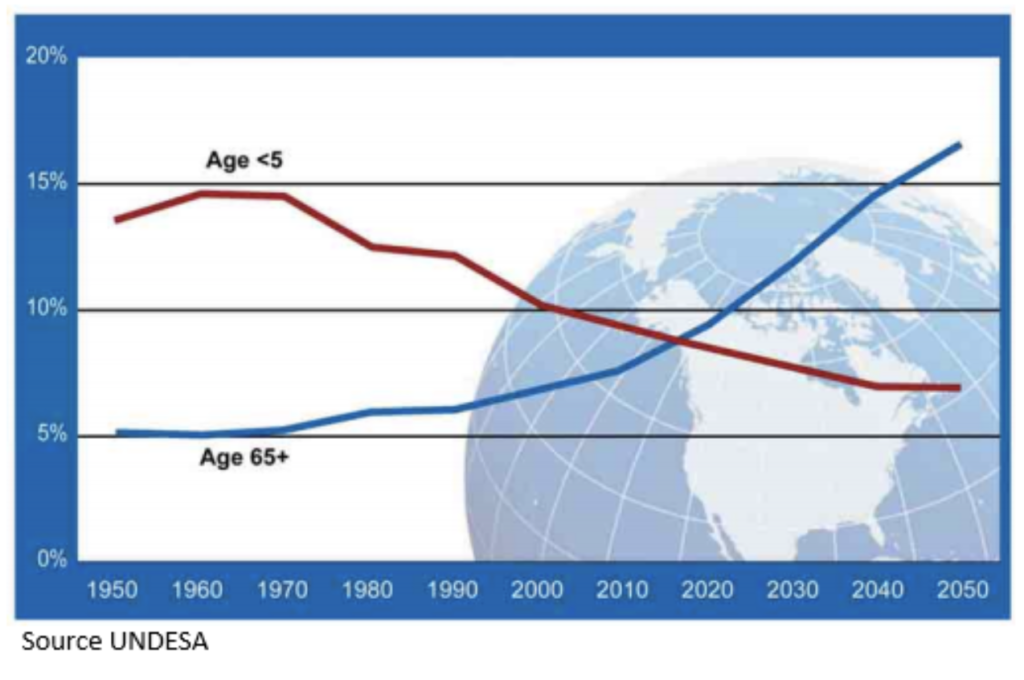 In the meantime, the world is subject to a secular demographic reversal that will eventually lead to inflation revival, as dependents (ie retirees and children) are supposed to consume more than they produce. With Americans above 65 expected to account for 21% of the US population in 2030 versus 18% today, and the pandemic that boosted retirements by 1.5 million, inflation tensions should increase in the future (on the contrary to Japan whose falling birth-rate is weighing negatively on the percentage of dependents). 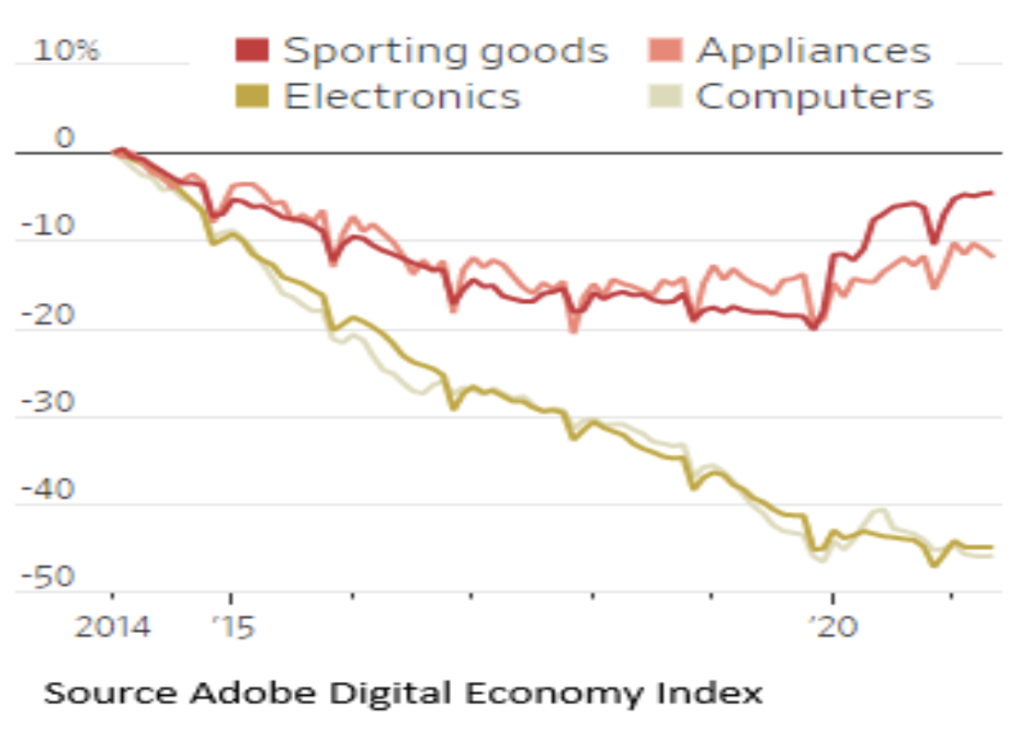 Moreover, as 14% of retail sales are now made online (versus 3% in 2005), digital platforms led to deflationary pressures. However, here also, as highlighted on the chart above, the wind is turning as the pandemic halted this dynamic. Online prices rose 2% YoY while they fell 4% per year on average from 2015 to 2019.

Supply chain disruptions however, which will be temporary, are not the only culprit. Secular forces may also be at work with higher taxes, as agreed recently, while the pandemic also showed the limits of the Gig economy (with the necessity to better pay and cover/protect contractors/employees). 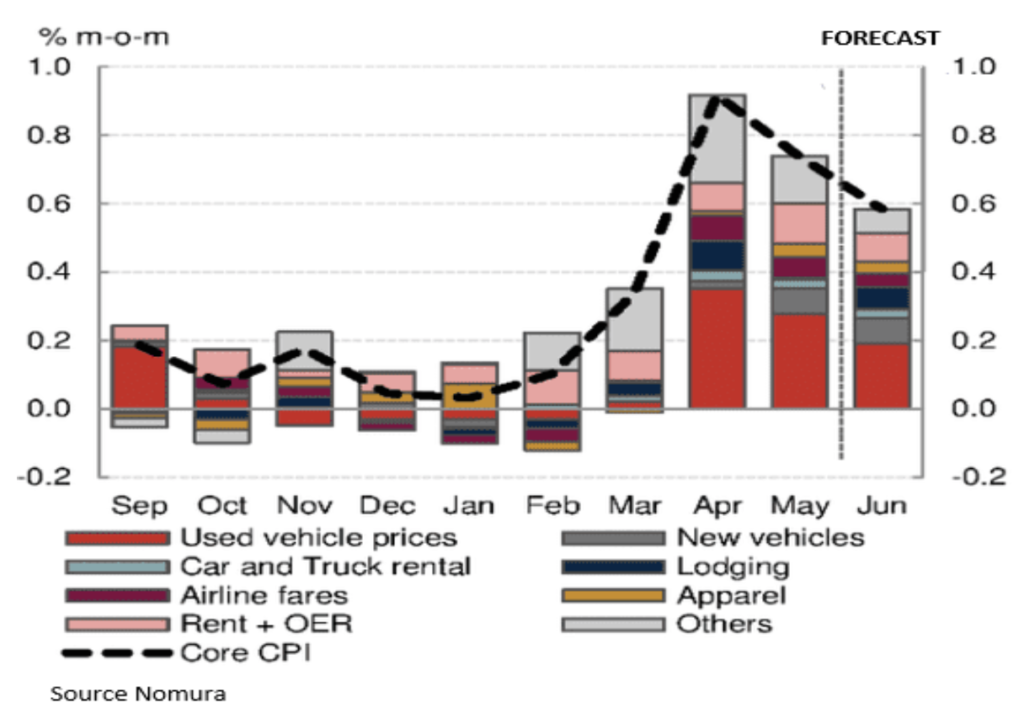 Meanwhile, shorter-term, as the madness of used vehicle prices is calming down, this should lead to slower MoM core CPI increases in the US. 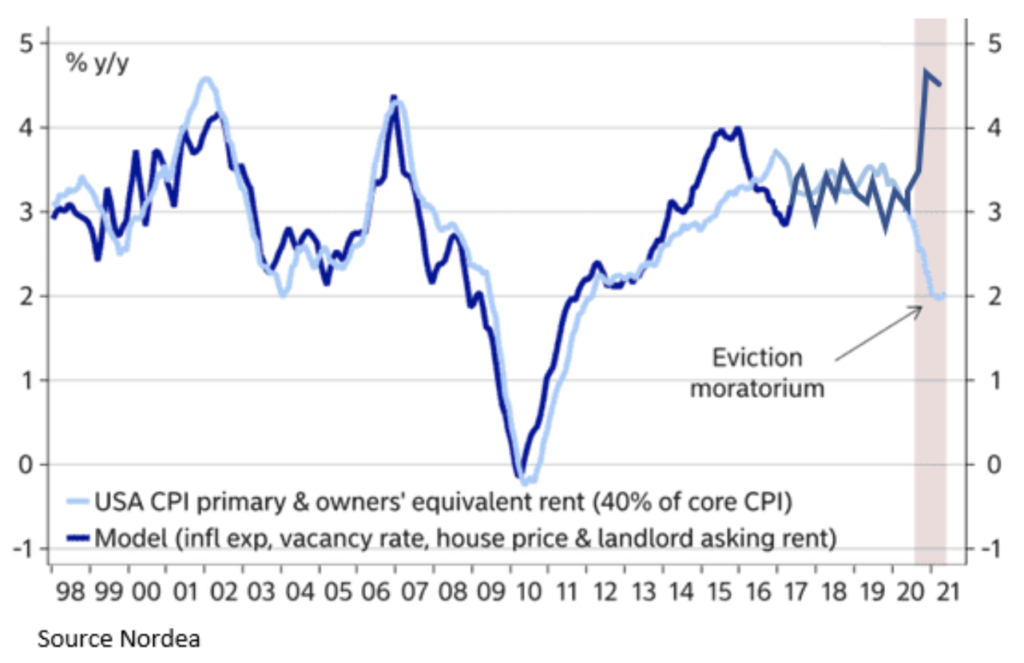 However, as evoked so many times, expect the cost of shelter (which accounts to 40% of CPI) to soon take off, especially once the eviction moratorium will be over. 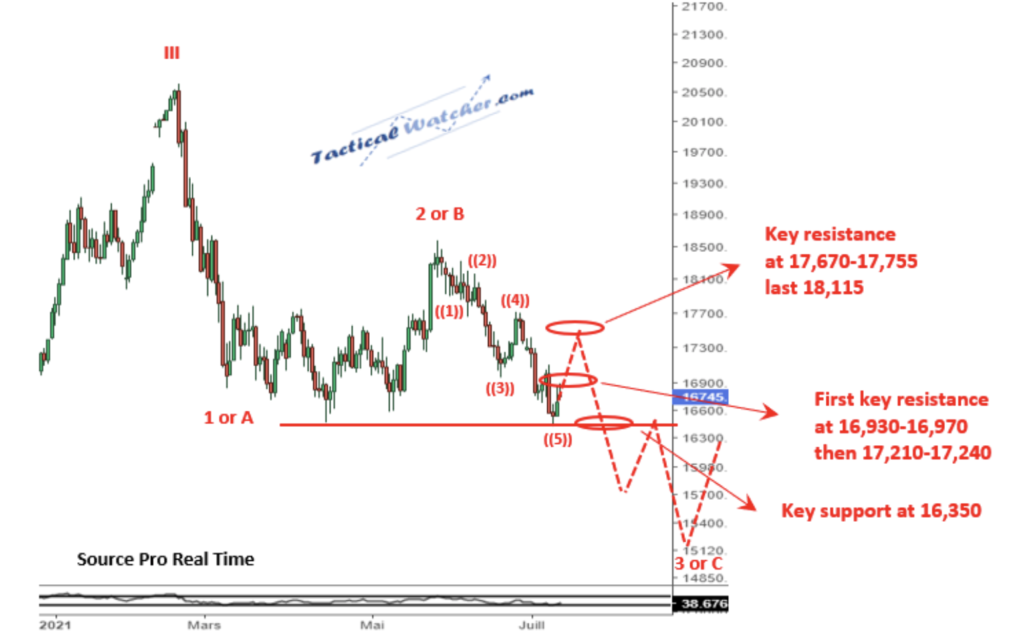 Just when the PBOC is injecting $150bn into the Chinese economy, with the RRR cut by 50 basis points for all banks, we count five subparts since the high of wave 2 or B, while the lows of wave 1 or A are still holding.
As a result, although we would not expect wave 3 or C to already be over, any move at this stage beyond the first key resistance would confirm that a larger bounce is set to occur for the moment. 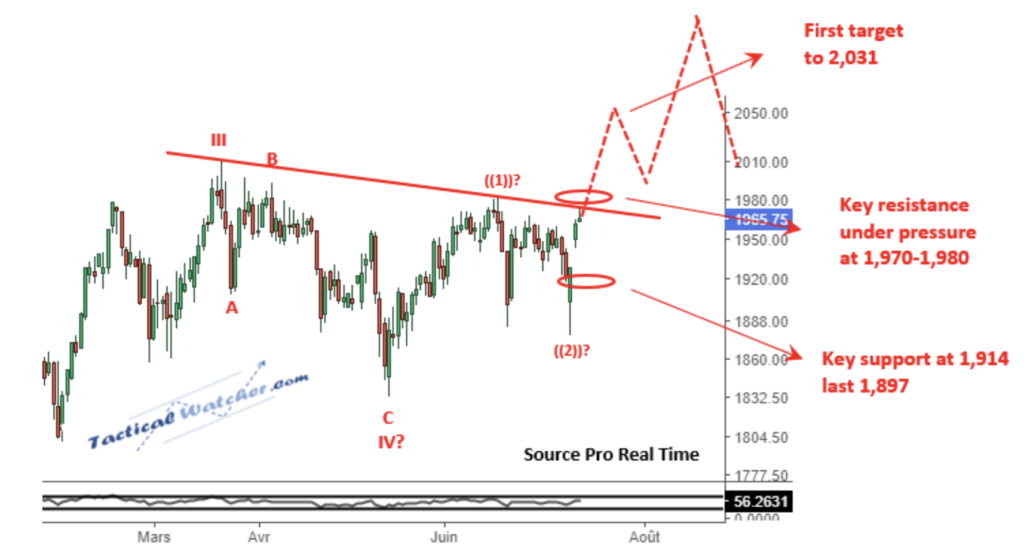 Any breakout through the key resistance should/would confirm/suggest the Japanese index is definitely resuming its uptrend. The situation is similar on the Nikkei.

And now, after the US, we are losing visibility in Europe; as we cannot assess whether wave 4 (which failed to reach our target) is already over.

In the end, for the moment, technically, the only views we keep confidence in are our series our defensive pair trades, added to the pattern on the banks and the opportunity of a reflation trade rebound, as described yesterday. 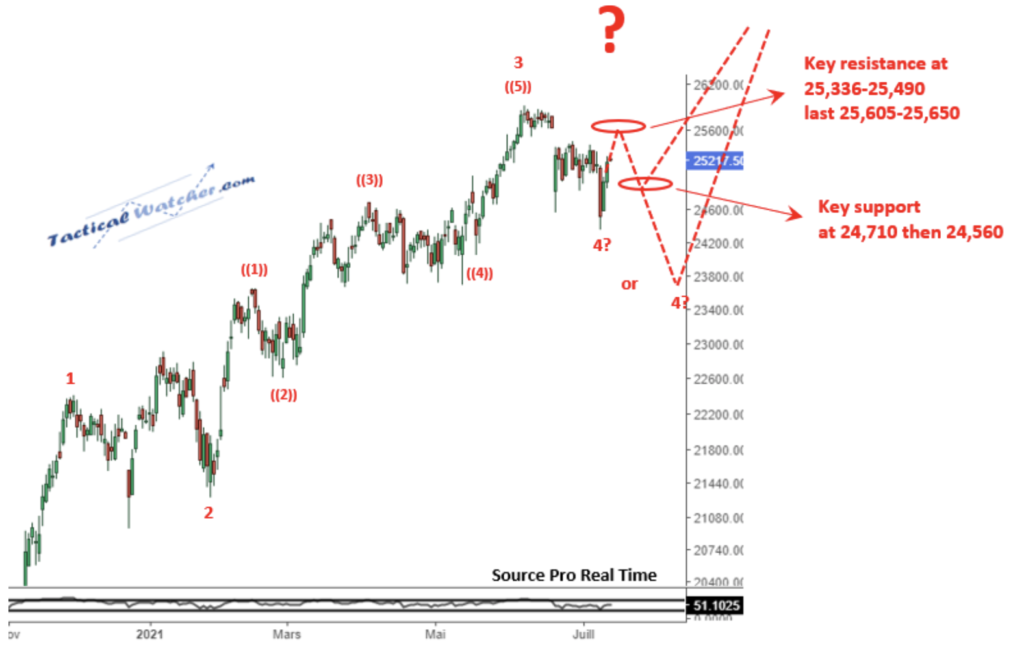 In Italy also, last week’s incapacity/failure to accelerate on the downside is a problem as it prevents us from assessing whether wave 4 is already complete.

Granted, the overall rally since March 2020 has been retraced by 1/3 while three clear corrective downwaves can now be counted since the high of mid-February. Still, does it mean that a new and long-lasting uptrend is already starting? Even if that’s possible technically, it is hard to confirm this fundamentally, especially when we remain so cautious on the US markets.

Time will bring the answer. We will keep you updated…

Ps: the picture is exactly the same on the MSCI EM index (if only given the 35% weight of China). 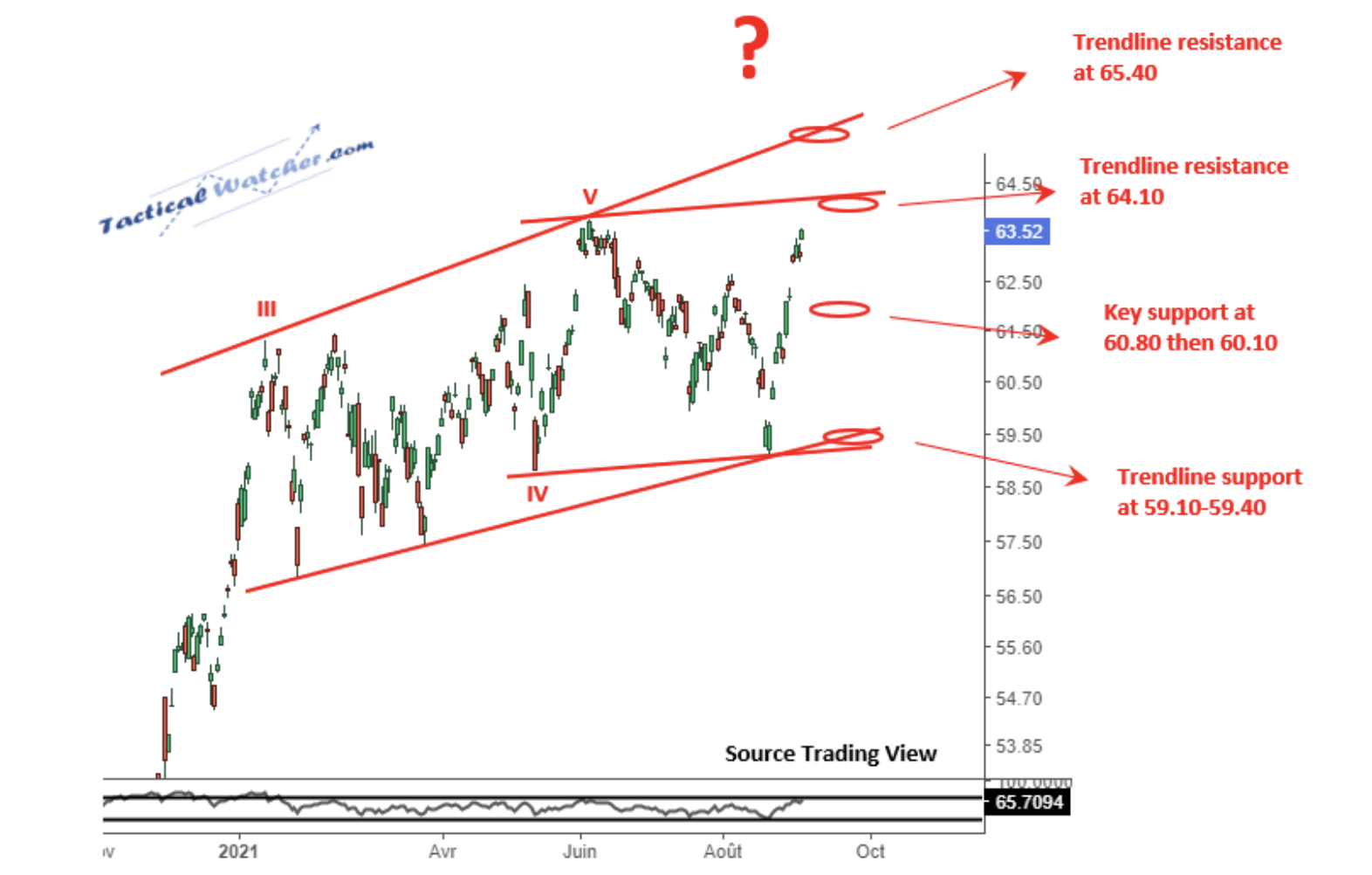 Visibility remains nil. We would just note that the US tech index is testing the upper bound of the channel that can be drawn since last March.